What is The Great Pacific Garbage Patch?

If the wind is strong enough, it can push the ocean's surface in the direction it is blowing. The great Pacific Garbage Patch is located in the North Pacific Gyre.  It is currently three times the size of the United States (not including Alaska and Hawaii) and is full of garbage.

HOW DOES LAND DEBRIS GET INTO THE GREAT PACIFIC GARBAGE PATCH?


Wind blows land debris into rivers and streams, eventually emptying into the ocean.  Tides and smaller ocean currents carry the debris far out to sea.  Once the debris enters the North Pacific Gyre, it gradually moves toward the center of the spiral.  As strong as the outer current is, the water at the center of the gyre is relatively calm.  Debris that reachers these calm central waters stays trapped inside by the strong outer current.  Plastic is the biggest culprit.  Some scientists estimate there are millions, perhaps billions, of plastic pieces in the GPGP gyre.

Charles Moore, a racing boat captain, was the first person to locate the Great Pacific Garbage Patch in 1997.  He noticed a huge amount of debris floating in the water at the center of the North Pacific Gyre: bottle caps, toothbrushes, water bottles, old tires, containers, etc. 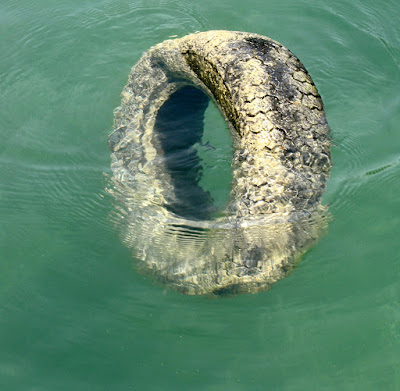 WHAT CAN WE DO TO HELP?

Here are a few ideas to get us started.

First, we can work together to clean up the trash we've already created.

Second, we can reduce the amount of trash we create.
If we start small and build from there, together we can make a difference.