What's A Jellyfish Without Water?

Without water a jellyfish becomes a BLOB!  The reason?  Jellyfish are 95% water. 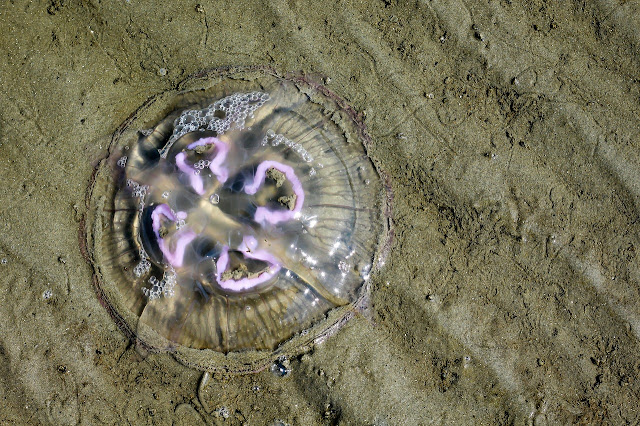 What are jellyfish made of?

Jellyfish are very simple creatures.  They have no bones, brain, heart, or blood.  Yet, each jellyfish has a three-layered body.

In addition to the layers, the jellyfish has a simple nervous system that allows the animal to smell, see light, and feel touch.  With these senses the jellyfish can detect both predator and prey swimming near its tentacles.

Contrary to their name, jellyfish are not fish.  Fish have backbones. Jellyfish are invertebrates. They belong to the phylum Cnidaria, which makes them related to coral and sea anemones. For this reason, scientists call them jellies or sea jellies.

How Do They Sting?

Surrounding the bell are the tentacles.  Each tentacle contains many cnidocysts: harpon-like stinging cells used to insert a numbing toxin into prey before consumption.

Jellyfish sting humans, too, if they get too close.  Even dead jellyfish washed up on shore can sting.  Some jellyfish stings have little effect on humans, others can be very uncomfortable.


How Do They Move?


Most of the time jellyfish drift along in the water.  However, they can propel themselves short distances by using a muscle that expands and contracts their bell.


How Long Do They Live?

Jellyfish have been on earth since before the dinosaurs.  Some live only a few months.  Others live longer than 30 years.

1.  "What are Jellyfish Made Of?"  Web.  11 Mar. 2018.  National Oceanic Atmospheric Administration.  <https://oceanservice.noaa.gov/facts/jellyfish.html>.

2.  Jellyfish by Pexels is licensed under CO Creative Commons.

3.  Moon Jellies by PublicDomainPictures is licensed under CO Creative Commons.