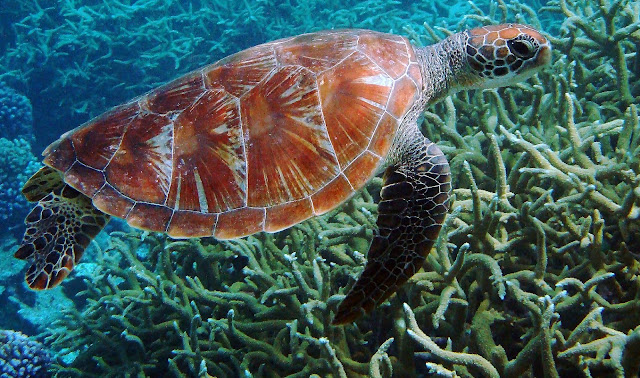 When they are ready to hatch, the hatchlings dig out of their sandy nest and scurry to enter the ocean before they are eaten by hungry birds and crabs.

2.  There have been sea turtles on earth since dinosaurs roamed the planet.  That's 110 million years.


Currently there are seven species of sea turtles in the oceans.  The green, hawksbill, Kemp's ridley, leatherback, loggerhead, and olive ridley live in U.S. waters, as well as many other places around the world.  But the flatback sea turtle is found only in Australia.


The color of a green turtles' carapace (top shell) can be a blend of black, gray, yellow, or brown, and their plastron (bottom shell) is usually white or yellow.  The turtles' name comes from the layer of body fat under their shell made green from eating seagrass and algae.


Sea turtles have streamlined bodies that make them graceful swimmers capable of navigating the oceans.  When active, they must swim to the surface of the ocean to breathe every few minutes.  But when they are resting, they can stay underwater for long periods of time.


Scientists believe a healthy sea turtle could live to be around 100 years old.


6.  A female sea turtle never forgets where home is.


When a female sea turtle is ready to lay her eggs, she will travel the open ocean and return to the beach from which she was born.  Some species travel more than 1,000 miles.